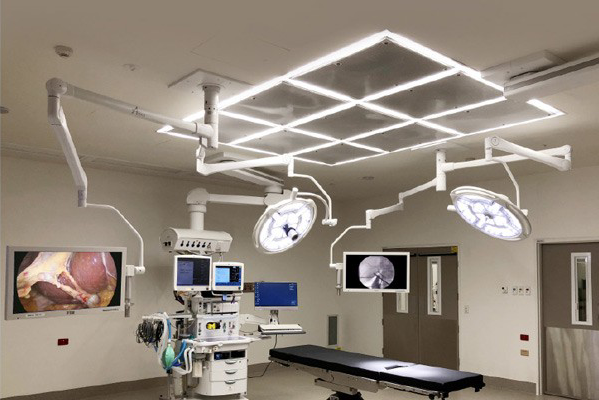 A cleanroom is a controlled environment where pollutants like dust, airborne microbes, and aerosol particles are filtered out in order to provide the cleanest area possible. Cleanrooms are generally used for manufacturing products such as electronics, pharmaceutical products, and medical equipment. This is because the items being manufactured can be easily affected by contaminants of particles in the air.

With airborne contaminants being a significant contributor to Healthcare Associated Infections (HAIs) and Surgical Site Infections (SSI’s), it’s easy to see why hospitals are turning to cleanroom technology in an effort to drive down infection rates.

The impact of airborne transmission

In the article – Using Cleanroom Technology, Improving Operating Room Contamination Control – it states that it has been estimated that airborne transmission accounts for 10% to 20% of Healthcare Associated Infections, although more recent studies have concluded that the role of airborne transmission may be underestimated due to the difficulty of culturing many airborne organisms and the complexities of assessing the role such pathogens play in the contamination of environmental surfaces and subsequent contact transmission.

The article considers an interesting parallel that can be drawn between the control of these airborne contaminants in operating rooms (ORs) and semiconductor manufacturing cleanroom environments.

In each case, the design principle of using unidirectional, controlled (often referred to as laminar) airflow to contain and remove airborne particles, particularly in the area targeted as the sterile field, is generally accepted as the most effective method of preventing airborne contaminants from landing in that sterile field.

Worth noting, cleanroom technology has proven effective in virtually eliminating human particle contamination in the semiconductor manufacturing industry. With results like this, it’s easy to see the benefits for the OR.

Employing AirFRAME in the OR

The AirFRAME solution from SLD Technology, sold, installed and supported in Australia and New Zealand by Wilhelm, can significantly reduce the incidence of airborne contaminants reaching the patient in an OR.

AirFRAME supplies air from a single, large diffuser, that concentrates the air delivery in a controlled air field over the surgical table, resulting in airborne particle movement away from the area of the patient, indicating that airborne contaminants at the surgical site can be considerably reduced.

AirFRAME is a fully integrated, modular, prefabricated solution designed specifically for operating room ceilings. It integrates the structural, air diffusion, pendants and lights into a single system. With installation times measured in hours instead of days, a project employing AirFRAME can see both timeline compression and cost reduction while improving patient outcomes.

The St George Hospital in Sydney was the first hospital in Australia and New Zealand to employ AirFRAME into an OR. The benefits to the clinicians and patients were immediate.

According to Dr Vytauras Kuzinkovas, Advanced Laparoscopic Surgeon “The air filtering system in theatre 15 is absolutely fantastic because all of a sudden you feel very comfortable operating where it’s neither hot or cold. Some people in the past used to complain it’s quite hot or cold. Most importantly, because of the air filtering system we don’t actually see any diathermy smoke – it disappears somewhere.

In the past when you even walk past the theatre you can actually smell someone operating. That means all the staff, the patient and the nursing staff are breathing in all this smoke and there is lots of evidence that with smoke particles we can have the live DNA of a patient, so there’s also a high risk of infection transmission. So therefore, this air filtration system means you’re operating in a healthy environment which is another bonus”

St George also undertook a study to compare the efficacy of the AirFRAME system, versus the traditional HVAC systems used in its other theatres. Suellen Moore, Nurse Educator, Perioperative Services observed “In the AirFRAME study we compared three operating room. One 26 years old, one opened in November without AirFRAME and operating room 15 with AirFRAME.

The study looked at air exchange, smoke evacuation and lighting for the operator. After some high level evaluation, it showed that there was sia gnificant difference between the three operating rooms. Obviously, the technology of 26 years ago was vastly different to today however the AirFRAME was far better in the air exchanges and the reduction in the smoke hazards.

The integrated lighting in room 15 with the AirFRAME system allows for a clearer, more visual aspect for the surgeon during the surgical procedure. It reduces the amount of shadow thus ensuring that the surgeon is able to have a clear view and thus better outcomes for the patient”.

As with St George, healthcare providers such as Evolution Healthcare in New Zealand are setting the benchmark for exceptional patient care through their adoption of this innovative healthcare technology at their Royston Day Surgery in Hawkes Bay; with partner Southern Cross Hospitals at their Grace Hospital in Tauranga and at their Wakefield Hospital in Wellington.

Greenfield site or redevelopment? With AirFRAME installing in a 1/6 of the time of conventional ceiling systems, if you’d like a faster track to a revenue-generating OR and a superior system, then contact us here.

How does your hospital manage and fight infections?

Is it time for a different approach in schools?